At the bottom of the world

The world still orbits the Sun, and its axis holds steady at 23.5 degrees from the plane of its spin. Those celestial movements operate on principles that have been constant for tens of thousands of years. Gravity introduces perturbations in that movement but the average person isn’t aware of them. People are much more in tune with seasons, and that tilted axis is responsible for the summer and winters, our springs and falls. In our big world, it also gives us summer in one hemisphere when it is winter in another. That was the situation I put myself into by flying to the bottom of the world in February to explore New Zealand. From the time the airliner doors closed at home to the time they opened at the same airport some 16 days later, calamity turned into adventure and mishap turned into merriment. Virtually each day was a race from one place to another as we visited farms, floated through caves, strolled remote beaches, hiked mountaintops, drove long stretches of gravel roads and woke people literally in the middle of the night.

Part of the chaos was due to jiggering our trip to meet another couple who were in the country for a wedding. They lived in Australia, and so in a sense were also on vacation. We both had intermittent communication issues, scrambled to synchronize our times, and drove for hours to get to our meeting spot, late in the afternoon in a small town called Themes, on our last night in the country.

And as things sometimes go, we talked the rest of the day away. We met at a cafe and had a light meal. We drove up the coast and inland to a hidden trail leading to a massive Kaura tree. It was the same road Lia and I had driven some three days earlier, crossing the Coromandel Peninsula. We drove to another trail, hiking deep into the rain forest. At one point we forded a shallow creek, Lia on my back and our female friend with her boyfriend on hers. She was barefoot and I wore waterproof shoes. We watched the sun go down from a bridge over the creek and made our way back to the car in twilight. We drove back to the town and found an Indian restaurant where we ordered food and drink and also found ourselves the very last patrons to leave. We stepped outside and said our goodbyes, the pairs of us facing two-hour drives to different destinations where we’d stay for the night.

The town was silent except for an unseen someone in an apartment playing rock tunes. The street was deserted. I thought I’d never see a scene like that again, but here I am only a month and half later in my own city, where the coronavirus has made it so. 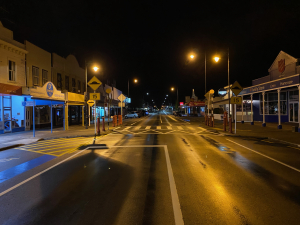 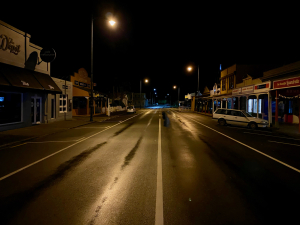 This entry was posted in Travel. Bookmark the permalink.

2 Responses to At the bottom of the world