I took the touring bicycle out this Saturday because it rained overnight, and that bike has fenders. Plus it proved its mettle in the wet during my Iowa ride. However, climbing up through Westwood Heights on my way to the Forest Hill Extension, I realized the derailleur on the big ring wasn’t working. I didn’t want to stop and figure it out there and just stood on the pedals during the step part of the ascent.

My next surprise came as I wound down to the pedestrian flyover on Portola street. There are immutable laws of physics we learn one way or another; placing glasses of wine on imaginary shelves always succumbs to gravity, bodies in motion tend stay in motion especially if they are linked to a General Electric locomotive at speed and heat transfer does readily occur with ceramic plates parked on a hot stove.

So it also is with wet pine needles on pavement, and despite treaded tires on my bicycle, the rear end washed out at low speed as I turned from the sidewalk to the flyover. I didn’t fall, but the entrance and exit to the ramp is shaded by pine trees, and even the slightest turn of the handlebars telegraphed lack of traction.

This route is all up and down. There are two flat sections between Golden Gate Park and my house- in total they amount to perhaps 300 yards. It crosses mostly residential neighborhoods, the only commercial portion being the Inner Sunset. After a turn in the park, I exited to Arguello Avenue which flies arrow-straight into the Presidio of San Francisco.

The Washington Avenue road through the Presidio is popular with every exerciser of any abilities. I pass casual bikers, spandex speeders, stroller-pushing joggers, hikers of a deliberate pace. What awaits where the road meets the ocean is this: 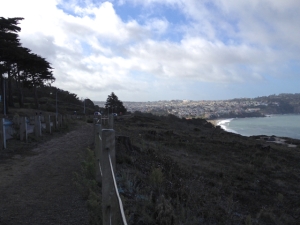 Looking south at the Sea Cliff neighborhood. The tiny bit of strand is Baker Beach. The trail is part of a system that runs from Ocean Beach on the western edge of the City to the Golden Gate Bridge and Crissy Field on the north, and even out to Fisherman’s Wharf and the Embarcadero on the east.

Turning to the north from the same position. The bridge is closer than it looks.

If you are visiting in a car with a mix of walkers and non walkers, your special half-day starts by dropping the walkers at Baker Beach and having them follow the trail along the road to Vista Point on the San Francisco side of Golden Gate Bridge.The walk is 30 to 45 minutes, depending on how many time you stop to look around. The drive is just five minutes, but the wait for parking at the other end can easily be a half hour. A gravel overflow lot is just a short way past Vista Point, and will be on your left. There is a cafe and curio shop at the point, as well as bathrooms. Here you can also walk out onto the sidewalk of the Bridge itself.

My ride back was uneventful except for the few cars driven by distracted drivers. Word of caution: if you aren’t sure of where you are going, pull over and orient yourself.

This entry was posted in Uncategorized. Bookmark the permalink.