Tangled woods lay about the neighborhood where I grew up. They were laced by foot trails and fire roads but between those places were deadfalls of pine trees, thickets of manzanita and deep brush. It was an excellent place to meander down the trails or blast down short straights of fire roads on dirt bikes. My little hooptie was a Suzuki 120cc two-stroke dual-purpose bike called the Cat. Everything on that bike except the seat, tires and cables was made of steel, rendering it almost indestructible and heavy as an anchor from the Queen Mary. That would have been great if it could actually pull its weight.  If engine horsepower were measured in fractions it might have had a double-digit number to its credit. As it was, there were hills in the neighborhood whose tops only its headlight beam could reach, and then only on a moonless night.

The Cat’s saving grace was its unique dual-range transmission. In normal operation it was a four-speed, but I could engage a lever that placed in an extra-low range, which made maximum use of torque and allowed it to to creep along very slowly. It was great for traversing grizzled terrain and maneuvering among tight spaces between trees. It was one of the few saving graces of this machine, because it made it easy to explore places that were literally off the beaten path. 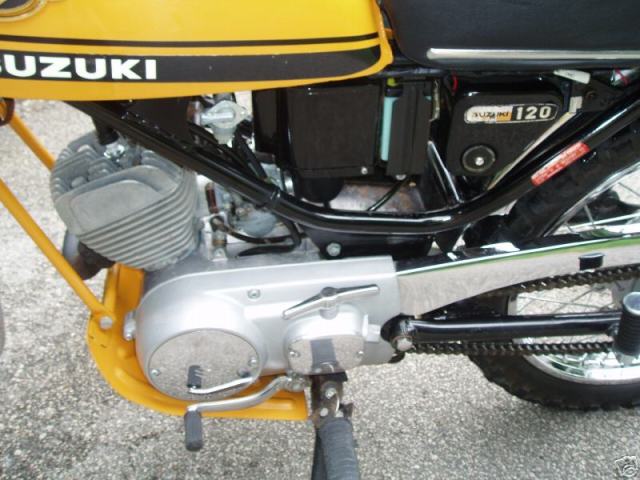 That rocker-switch type thing on the transmission case is the infamous lever for the Suzuki’s dual-range transmission.

One late afternoon day I had trundled my way into the woods hoping to find a path between an old rock quarry and a city woodland park. The only trails here were faint tracks leading to back yards of residents living on a nearby road. The spaces between the house were wide, and I was hoping to find a short cut through the woods. I had the bike in low range, and it acted like a tractor as I picked my way through the brush. I saw what looked like a promising section of barren earth and turned onto it. It was comprised mostly of loose quartz on a downhill slope and was somewhat slippery. So it was I came upon a bush protruding into the path and touched the brakes to avoid it.  The front wheel locked, the bike slid into a dry rill that had developed beside the path and the motor died.

I slid with the bike but neither of us went very far. There was no injury and no damage, but I could see the rill kept going downhill to become a ravine, and I did not want to go there. The ground was slippery underfoot but I managed to get on the bike and kick it back to life.

But it would not bite on the slopes of that ravine. Every time I pointed the front wheel uphill, the rear wheel spun and the chain clattered. I slipped clutch as much as I knew how, tried a gear higher, bounced on the seat trying to help the rear wheel get a grip. Nothing worked.

I shut the engine down and looked around. The ravines walls weren’t steep, maybe shoulder height.  Behind me it got steeper as it went downhill and was choked with underbrush and debris. I didn’t know what lay at the bottom of it.

I tried again. I put the bike in the lowest low gear it had. I sat on the bike, bracing my feet against the sides of the ravine. It was unsteady but I figured if I just got going I would at least gain elevation. But it was no good. The rear wheel grabbed, but I couldn’t hold the front straight and it tried to climb the sides. I slipped off, the bike fell back and further down into the ravine, and the engine died.

I’m pretty sure I swore at it. I probably chanted of all the words I knew at the time, because even today in times of extreme stress it comes to me as naturally as saying “Ow!” when I close my finger in the door.  I picked up the bike and kicked over the engine. It wouldn’t start. I kicked it again. Its tiny little one-eighth liter cylinder puffed like a poodle’s fart. I waited for a moment, then rotated the kickstarter one more time. The two-stroke spit and wailed before settling down into a fitful idle. I reached over to place it in gear and with my hip against the gas tank, began walking it back up the ravine. It shuddered, lurched and began wriggling up the ravine, loose dirt and vegetation flung back by the rear wheel.

And that when the knocking began. Somewhere behind the engine side plates was a definite, loud knocking. I thought to myself, I couldn’t possibly have broken the engine. The knocking became more pronounced as I gave the engine more gas, but the bike didn’t seem to be going anywhere. I finally stopped and looked at it. Of course, it said nothing. It just sat there on its semi-street tires, smelling of two-stoke oil and partially consumed hydrocarbons.

I started the engine. I tried again. I pushed hard and it moved forward about five feet before I heard the sound again. This time the knocking was more of a clank. The bike stopped moving forward entirely, yet from the corner of my eye I could see the chain whipping around like a scalded cat. I cut the power and hit the front brake to keep it from again succumbing to gravity.

The sun was going down. The tall pines cast shadows from their tops, and made dark caves from their bases. It was getting cool on the hillside. I started the bike again. This time the tire bit for just a moment before the chain slipped again. I killed the engine.

I didn’t cry but I was angered to the point of tears as I screamed at the motorcycle as it lay in the dirt. It was frustration in metal, a devil in black and yellow. I may have even kicked it. I picked it up, started it, put it in its lowest gear, and slipped the clutch.

It bumbled forward, moving at walking speed. I walked beside it, pushing on the handlebars to add boypower to the horsepower. The chain slipped one then once more. I pushed harder on the handlebars and it stopped  – for a moment. I gave it some more gas and grunted as I threw all my weight into the handlebars. My feet slipped, the tire slipped but the chain stopped making noise. And then just like that, the tire hooked up, the chain caught, and I jumped on the bike and drive it up and out of the ravine.

When I got on level ground, the engine still running, maybe then I cried. It was almost dark, but I knew the trail home from that point like the back of my hand.  When I got back I chained the bike to its usual partner, the gas meter, and threw a tarp over it. And I didn’t go back to it for almost a week.

But in the coming weeks, I would learn about chain slippage and countershaft sprockets.  I would learn more about torque and horsepower. I would start taking apart the bike and putting it together again. And I would never, ever get stuck in a ravine again.

I also discovered and fixed the reason for the little engine’s puny power output. Just about the same time I got my license.

1 Response to In a rut