By land and sea

On any given day, a trip through San Francisco’s streets is a study in personal transportation. For a town whose charter dictates a public transit-first policy, there is  ridiculous variety of personal or semi-personal transportation on the streets. Two people in my building have electric skateboards. Electric and semi-electric bicycles aren’t even a novelty anymore. The odd Segway trundles by occasionally and it may be only a matter of time before the utility bikes are contracted by AAA to help lesser bikes in distress.

But I digress. As I’ve made my way through the city the past couple of months, I’ve encountered a few other odd vehicles that emerged from garages somewhere.

Leaving work one evening on my trusty RockHopper I encountered a classic burgundy Rolls Royce Phantom IV dead in the lane, a nattily dressed blonde behind the wheel and an equally dapper man straining to push the 3,000-lb car to the curb. His progress, like the car, was stately. I parked my bike and ran over to help, as did a couple of other  passers-by. The whitewall tires on the big Rolls started making full turns and we got it to the side, the woman behind the wheel somewhat nervously looking over her shoulder at obstacles she probably had no chance of missing even if she saw them.

Not that there was much to worry about in terms of damage to anything. I had gingerly pushed against the grille, afraid of bending the chrome bars. Cell-block doors on Alcatraz have more give in them. The steel was cold and dense, and I can only imagine if any of the King’s red deer should encounter this car at speed on the back roads of Conventry, the lord and lady of the house would have venison for a month and the garageman would have to spend a hour or two picking fur out of that grille. 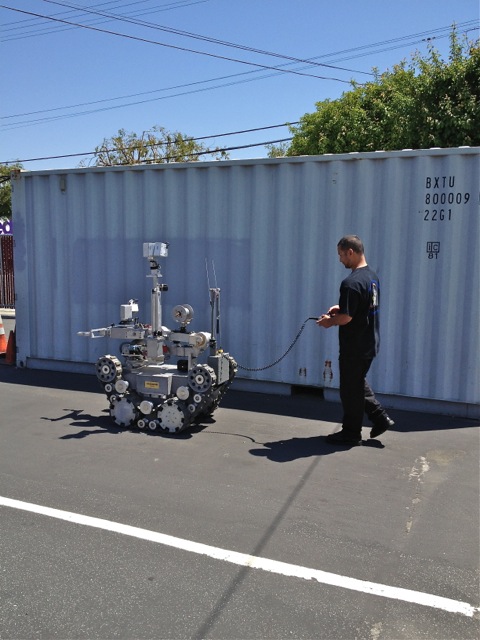 This little Tonka toy was being driven back to a nearby large tactical vehicle. It came from a building across the street from a warehouse where I was picking up some furniture. According to its pilot, it had been in for repairs and was going back to active duty. 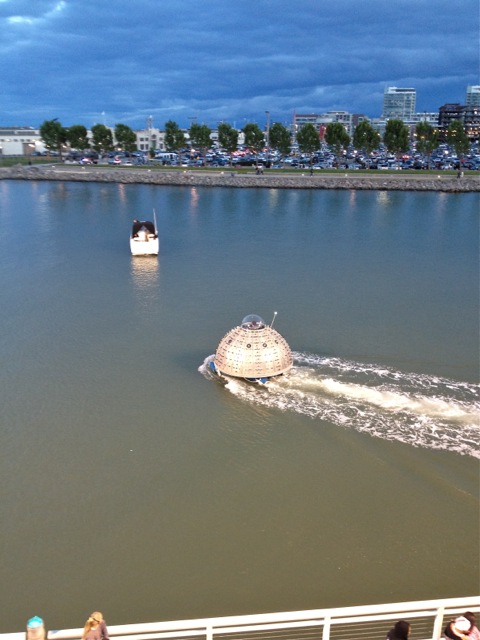 Take me to your lead-off hitter.

The captain of this floating tin can was tooling around McCovey Cove after a baseball game at AT&T Park. He had a pretty spectacular light show running aboard ship also.  Most of the other vessels in the cove gave him a wide berth, except for a boat adorned in Giants colors.

The difference between a boat and a ship is what again?

On a bicycle ride one Saturday morning I found myself on the outskirts of the city’s Dogpatch district. This area, virtually the last industrial bastion in San Francisco, has been settled by very unlikely neighbors. One block features a Hells Angels clubhouse at one end and a day care center at the other. It is also home to Team USA’s 72-meter practice boat for the America’s Cup. For scale, that’s a Honda Accord hiding behind the pole. I am pretty sure a platoon of sailors is needed to counterbalance this catamaran in a strong wind.

This entry was posted in Streets. Bookmark the permalink.

1 Response to By land and sea